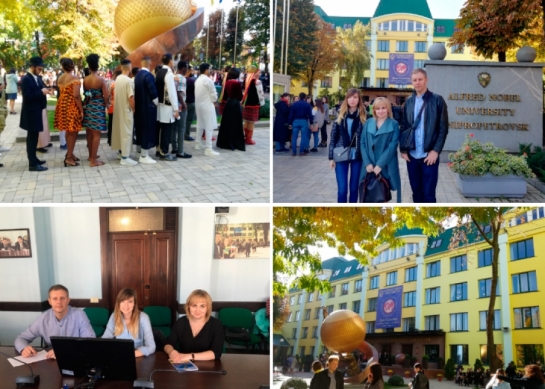 On October 3, 2019 a large-scale event «Unity Day» took place at Alfred Nobel University with students from more than 40 countries.

From «KROK» University the event was attended by: A. Lotariev, Head of International Office, A. Drobyna, Project and Program Coordinator, O. Chaika, Coordinator of Preparatory Course for International Students.

The grand opening of the holiday took place at the Alfred Nobel Planet Memorial. In the morning, the orchestra of M. Glinka Conservatoire of Dnipro (artistic director and conductor Georgin Igor) played for guests. Students, professors, community representatives and honorary guests were present at the opening.

After welcoming words, the student of Alfred Nobel University Saliem Makhmud (Libiia) and Vice President of the Ukrainian Student Association Konstiantyn Kovalishyn read the UN Address and students from Europe, Asia, Africa, and America signed and endorsed the UN on the occasion of «Unity Day» for foreign students.

The celebrations finished with tasting the loaf - a good tradition that symbolizes involvement in a single cause, initiative and accomplishment.

Finally, at the round table, representatives from different universities discussed issues related to problems of foreign students, foreigners’ studying in Ukraine, work with Embassies / agents and representatives of SMS.

The day turned out to be extremely productive and informative. We are thankful to Alfred Nobel University for the invitation and knowledge.

More in this category:
Who does not remember their past, is doomed to repeat its mistakes...
A Visit of Hungarian Partners »
back to top
« »