Some Current Information for Foreigners Coming to Ukraine! 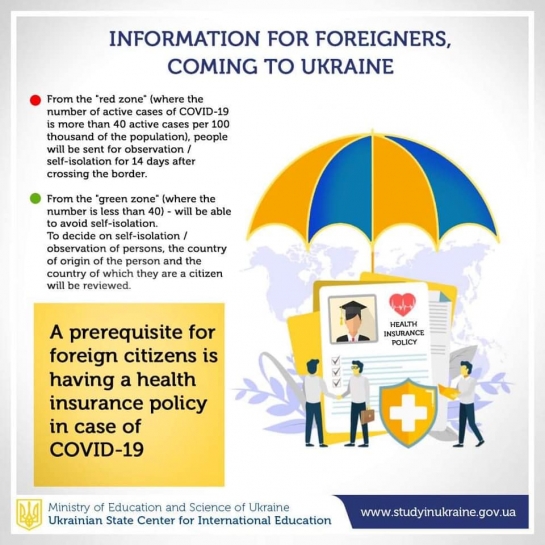 People from countries where the number of active cases of COVID-19 is less than 40 per 100,000 of the population will be admitted to Ukraine without self-isolation/observation.

An adaptive approach to self-isolation/observation of Ukrainians and citizens of other countries arriving from abroad has been introduced since June 15.

Countries are divided into 2 zones, according to the number of active cases of COVID-19 per 100 thousand of the population. From the «red zone» (where the number is more than 40 active cases per 100 thousand of the population), people will be sent for observation/self-isolation for 14 days after crossing the border. From the «green zone» (where the number is less than 40) - will be able to avoid self-isolation.

To decide on self-isolation/observation of persons, the country of origin of the person and the country of which they are a citizen will be reviewed. At the same time, if a person is a citizen of a «red zone» country, but has supporting documents that they have been in a «green zone» country for the last 14 days, only the country of departure will be considered.

More in this category:
Marketing Training by Austrian Colleagues
International Ranking U-Multirank »
back to top
« »