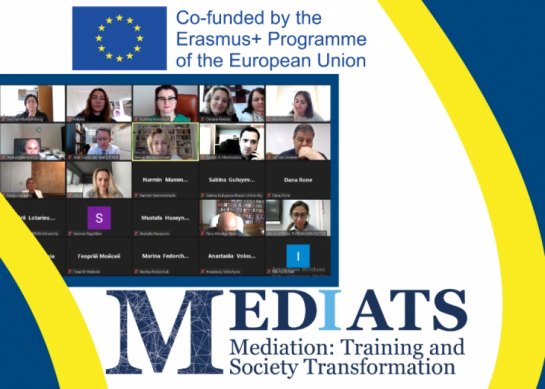 On April 6, 2022, the meeting of MEDIATS partners was organized online. The event began with one minute of silence in honor of memory of soldiers and civilians who died because of a full-scale armed aggression of the Russian Federation against Ukraine. In their speeches, all present partners expressed their sincere condolences and inspiring words of support to the Ukrainian people, as well as discussed further steps of cooperation and development of the international community MEDIATS.

It is worth noting that the consortium cooperates not only on working issues, but also partners are ready to help each other in difficult situations. Since the beginning of the war, all partners have supported Ukrainians.

At the initiative and support of Prof. Jan van Zwieten, Rector of the Netherlands Business Academy, Oksana Oliinyk, the alumnus of Master Degree program in Mediation at KROK Business School, coordinates Ukrainian school for Ukrainian children in Dordrecht. Oksana was also one of the participants of the training for students of mediation program, which was organized in Dordrecht in November 2021. Marjon Coopers and Gea van Klompenberg, lecturers of the Netherlands Business Academy, have organized a medical assistance to group for Ukrainians and do other support for their Ukrainian friends, including involving to the project activities.

Halyna Bohachenko, Project Manager of «KROK» University, together with Yvette Livius, Education Coordinator of Breda City Council and NLBA Executive Director, are organizing education for Ukrainian children in cooperation with Breda schools. Yanina Nedashkivska, alumnus of KROK Business School, organized humanitarian activities in Spain, together with university staff to develop the Platform for Peace at Catholic University of Saint Anthony (UCAM)o in Murcia, Spain. All these is due to help of Maria Mendes Rocasolano, professor of UCAM University, who was the trainer of Yanina and other students at training for students in mediation program, which took place in October 2021 in Spain.

Oksana Koval, Director of Educational and Scientific Institute of Communications of West Ukrainian National University, that recently joined the consortium, announced the International Scientific and Practical Conference «Communication as a factor in the transparency of social interaction: psychological, historical, legal, economic and political dimensions». The organizers plan to hold a conference on April 28 at West Ukrainian National University.

We are glad that the consortium of MEDIATS project is turning into a MEDIATS community, in which all project participants communicate, help each other, create and implement new initiatives, actively involve new partners, such as West Ukrainian National University - this is real added value and impact of the project, that changes lives for better.

More in this category:
Participation of Representative of Ukraine in CEEMAN International Seminar
Informational Event «Erasmus Day» »
back to top
« »