Ambassador of the Republic of India visited «KROK» University 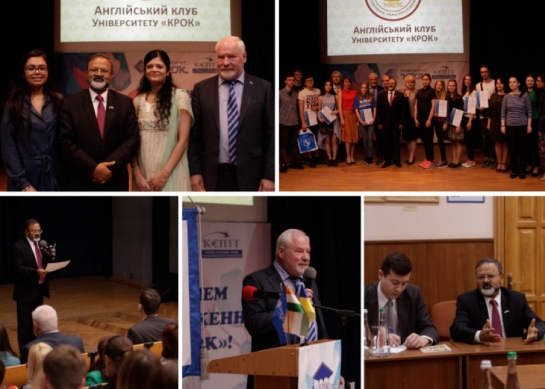 On May 18, 2018 Mr. Manoj Kumar Bharti, Ambassador Extraordinary and Plenipotentiary of the Republic of India to Ukraine, visited «KROK» University. The Indian diplomat met with Rector of the University S. Laptiev, Vice-Rector on International Affairs D. Tkach, Head of International Office A. Lotariev. During the meeting, S. Laptiev and Manoj K. Bharti discussed the possibility of establishing cooperation between «KROK» University and Indian higher education institutions. Both sides evaluated the talks as productive and very important.

Ambassador Extraordinary and Plenipotentiary of the Republic of India to Ukraine gave a speech as Speaker of the Day at the First Meeting of the English Club of the University. English University Club is a platform for developing creative thinking, effective approaches in public communication and developing a formula for human success not only in the national but also in the global dimension.

In his presentation, «The Role of India in Your Future» Mr. Ambassador told about historical, geographical, social, cultural, linguistic and other features of India. The diplomat highlighted the prospects for deepening the cooperation between India and Ukraine, in particular in the field of economics and education.

An interesting presentation of the guest demonstrated India's significant role in the global dimension, which influences the formation of the future of each of us.

Mr. Ambassador convincingly proved that India seemed to be an important factor in forming modern trends in the development of IT, medical research, space constructions, etc.

Mr. Ambassador thoroughly answered all the questions of the students.

With great pleasure, Rector of the University presented the certificate of merit to Suman Barai, the mother of the President of the English Club, for the significant contribution to the organization of the educational process of «KROK» University, which was a pleasant surprise for her.

This was an extremely exciting start of the English club!

Keep calm and break a leg!