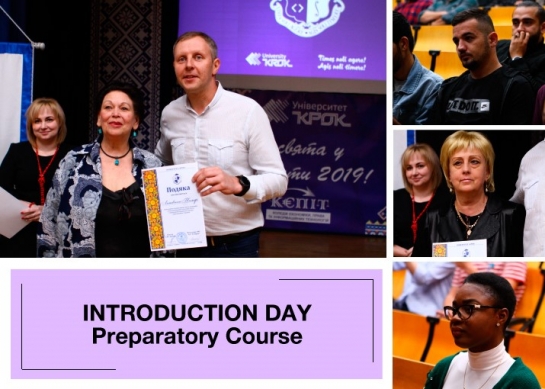 The concert was opened by a dancing team «K-girls». Their drive was taken by the hosts Maryna Yevchenko, Administration Manager of International Office, and Soheil Pournikdast, the third year student majoring in «Management» Ukrainian–Hungarian program.

Later, Andrii Lotariev, Head of International Office, congratulated everyone on the beginning of their studies, wished them inspiration, patience and endurance. He also drew their special attention to educational rules established by «KROK» University for foreigners and briefly outlined the educational programs offered to students after graduating from Preparatory Course.

In addition, Merit Certificates for professionalism, dedication and qualitative training of students were awarded to Victoriia Shraif, Tamara Lytovchenko and Olga Velychko, lectures of Russian as a foreign language.

During the event, international students had the opportunity to learn about «KROK» University and get acquainted with the Ukrainian culture, as several musical works performed by KROK’s choir were sung in the national language.

At the end, all guests were treated to ice-cream.

The enthusiastic look and smile were on lecturers’ and students’ faces throughout the event.

After the concert, newly minted students and lecturers went to the classrooms to get acquainted.

We hope that such kind of event for freshmen will be a wonderful beginning of their studies at «KROK» University.

More in this category:
Cooperation between «KROK» University and Technical Committee for Standardization «Compliance Assessment»
Dual education is the key to a successful career »
back to top
« »