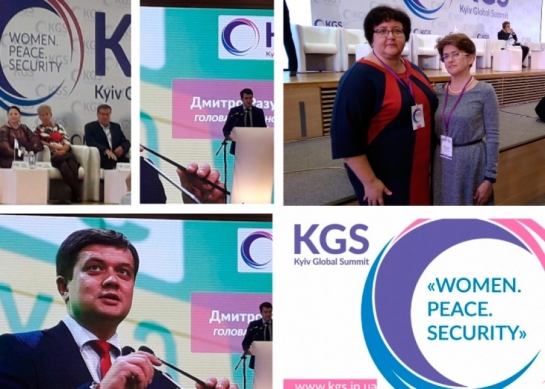 Kyiv Global Summit is an effective platform for interaction between Ukrainian and foreign politicians, business representatives and public leaders - an example of PPP (public private partnership).

In plenary discussions women-leaders from all over Ukraine spoke about the most important challenges - peace, the fight against poverty, the protection of the women’s and children’s rights, overcoming an acute humanitarian crisis.

As a result of plenary discussions, in order to establish peace in Ukraine as soon as possible, participants of Kyiv Global Summit «Women. Peace. Security» supported the format of diplomatic settlement of the conflict in the East, expressed full support for the agreement of the political «Shtanmaier’s formula», continued negotiations in the Normandy format and discussed the readiness to implement the Minsk Agreements.

Women are the soft power that with the example of tolerance, mutual respect, partnership, putting aside all ambitions and emotions, will help to make the process of peaceful resolution of the conflict as successful as possible! The results of the work were put down in Kyiv Global Summit Declaration: «Women. Peace. Security» and were fully supported by the participants.

More in this category:
New Project by CDC and Alumni Association of «KROK» University
Congratulations to Associate Professor of the Department of National Economy and Finance Svitlana Pletenetska! »
back to top
« »