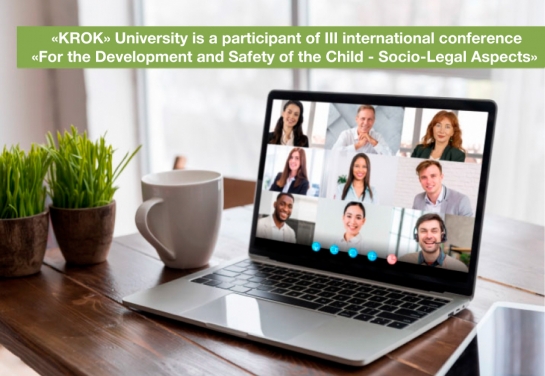 On November 20, 2020, representatives of «KROK» University took part in the III International Conference «For the Development and Safety of the Child - Socio-Legal Aspects».

November 20 is the day established by UN General Assembly Resolution 836 (IX) of December 14, 1954, as a day to support activities aimed at ensuring the well-being of children around the world. It was on this day, November 20, 1959, that the General Assembly adopted both Declaration and the Convention of the Rights of the Child.

«KROK» University was represented by members of the conference committee A. Frantsuz, Hero of Ukraine, Doctor of Law, Professor, Honored Lawyer of Ukraine, Dean of Law Department and Doctor of Law, Tetiana Frantsuz-Yakovets, Professor of Constitutional, Administrative and International Law Department. In addition, Nataliia Stepanenko, a Ph. D student of major 081 Law, made a report on the topic: «Legislative Gaps in the Field of Protection of Children in Armed Conflict in Ukraine».

More in this category:
Constant Professional Development!
Project «Initiative of Academic Integrity and Quality of Education» »
back to top
« »